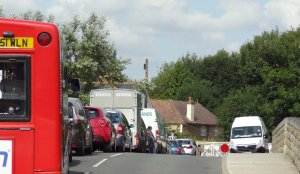 A quick-thinking level crossing keeper averted disaster after a Range Rover rammed the level crossing gates at Chartham ten days ago. Consequently the main access road between the village and the A28 is still closed to all traffic, and Network Rail does not expect to be able to replace the crossing gates until mid-July. The Kentish Gazette reported that Network Rail's spokesman Chris Denham said: "Our quick-thinking crossing keeper took action as soon as he saw the incident. Without that, we could have faced a far more serious accident. He alerted the train driver seconds before the approaching Cannon Street to Ramsgate service was due to arrive." Chris Denham added that "This type of crossing is becoming rare and the metal gates, which in this case are thought to be more than 30 years old, are all bespoke." In a similar previous incident the level crossing gates at Wye (see image above), trapped a 16 year old driver in a Ford Fiesta. On that occasion in the driver did not risk crashing through the gates to escape. Instead the high-speed chase along miles of narrow country lanes from Westenhanger ended without injury when a police Range Rover rammed and disabled the Fiesta, before the Wye crossing gates reopened.

Kent Police promptly arrested the 16 year old in February 2016, and charged him with driving dangerously, driving without a licence, and for failing to stop.