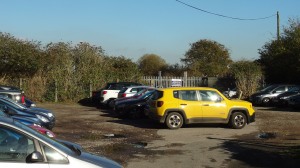 A Planning Inspector has dismissed an appeal on the Former Goods Yard site. He found that the scheme was in conflict with Local Plan and Wye Neighbourhood Plan (WNDP) policies. The property developer proposed to build fourteen three storey town houses off Bramble Lane, Wye adjacent to the railway line. However the Inspector judged that the scheme would 'have a harmful effect on the immediate setting thereby compromising the AONB's character.' He added that 'the scheme would also conflict with Policy WNP2 and WNP8 of the WNDP which require high quality design and for new development to respect the qualities of the AONB.'

The Inspector concluded that 'although I have found certain of the Council's objections not sufficiently well founded to cause the appeal to fail, I have found the scheme to be unacceptable in other respects. Overall, I conclude that the proposal would conflict with Policies SP6, HOU5, and ENV3b of the Local Plan. It would also conflict with Policies WNP2 and WNP8 of the WNDP. I find there are no material considerations of sufficient weight that would warrant a decision other than in accordance with the development plan. Accordingly, I conclude that the appeal should be dismissed.'

Over 60 Wye residents objected to the plans and the Parish Council registered a strong objection on many grounds, including pedestrian safety and the loss of valuable parking spaces in Wye station car park. The scheme did not offer any affordable units as at the time it was registered the threshold was fifteen units. The Inspector's Appeal Decision letter, plans and some other papers are still open to view under the original planning application number 17/1646/AS