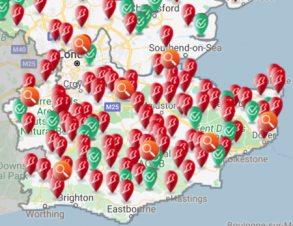 Wild weather associated with Storm Ciara is causing widespread damage and disruption to the electricity supply network across the country. Power cuts affected over half a million homes on Sunday. In the Wye area UK Power Networks is dealing with five faults involving high voltage overhead electricity lines. Another fault with an underground electricity cable fault 'is causing an area wide power cut.' The affected local postcodes are TN25 4, TN25 5, TN25 6, TN25 7, TN26 1, TN26 2, TN26 6, and CT18 8. Although Wye experienced at least twelve short power cuts over a period of about ten hours, there are no reported faults showing now in TN25 5, and the wind speed is dropping. UK Power Networks aims to repair the remaining faults by midnight.

To report a power cut call 105, or UK Power Networks' 24 hour freephone number 0800 3013105. If you lose WIFI access during a power cut you can check the list of known power cuts in your postcode area on your mobile phone instead - if you have a 3G or 4G signal. UK Power Networks owns and maintains the electricity cables and lines across London, the south east and east of England. The map (above right) of all the reported faults on Sunday evening shows that UK Power Networks' repair teams are dealing with hundreds of power cuts across the whole region.

Southeastern 'strongly advise passengers NOT to travel today' by train, warning that services 'may be severely disrupted or cancelled due to Storm Ciara' and that rail replacement buses are 'unlikely to be available'. As such 'you may not be able to complete your journey.' There was disruption caused by a power line on the track at Chilham and numerous fallen trees across the network. In the event, all the work done to keep the tracks clear enabled some trains to run on time, despite the 50mph speed restriction. Those trains which were not cancelled this evening have been running anything up to 32 minutes late. By midnight services were running normally again between Ashford and Canterbury West. However, London Victoria has roof damage, and Southeastern advises passengers to check before travelling on Monday.

After a day of heavy squalls the water level is rising sharply in the Great Stour at Wye, but there are no flood alerts or warnings in force this evening. Last week the Environment Agency reported that nationally the 'river flows at all but 3 rivers we report on are classed as normal or higher for the time of year.' The ground is saturated and with a week of rain forecast there is a risk of flooding. You can monitor the situation by clicking on the Wye 'Flood Information' button. Clearly, the northern and western part of the country is taking the brunt of Storm Ciara, and confronting far higher rainfall levels and wind speeds. The Met Office recorded 7 inches of rain in the past 24 hours in the Lake District at Honister Pass. Whereas the Met Office only predicts gusts up to 48mph for Wye this evening and stopped the amber warning for wind across Kent at 21.00.