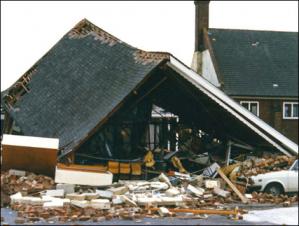 Thirty three years ago, on the night of the 15th/16th October 1987, the Great Storm killed eighteen people as it destroyed buildings, cars and other property across southern England and East Anglia. The wind destroyed the Small Hall completely, and as the walls collapsed they flattened cars parked beside the building. Fortunately as the storm struck at night Wye Village Hall was empty, so it caused no casualties. Thousands of mature trees in Olantigh Park and across the North Downs did not escape and were among the estimated 15 million trees felled in a few hours by the worst storm since 1703.