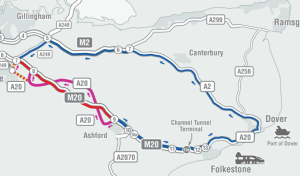 Highways England is testing the £55.1m moveable concrete barrier overnight until 08.00 Tuesday 15th December. In preparation for Operation Brock and Operation Stack, Highways England is closing up to seventeen miles of the M20 in both directions overnight from 20.00 until 08:00. These overnight closures and contraflows affect sections of both carriageways of the M20 at different times between J7 (Maidstone), and J9 (Ashford coastbound) and J9 and J8 (London-bound). During this exercise vehicles over 4.7m will be signed to follow a different route, leaving the M20 at J7 to join the M2 (via A249 Detling Hill) then the A2, the A20 (via Dover and Folkestone) before rejoining the M20 at J9 (Ashford). Highways England states that 'the system will allow port-bound lorries to be held on the motorway while all other traffic continues to have access to the motorway in both directions.' The current Traffic Report for the M20 shows 'severe' disruption to eastbound traffic is expected until 21.00 13th December, but westbound carriageway will be affected between 06.00 Monday 14th December until 06.00 Tuesday 15th December.

The burst watermain on the A20 at the Bockham Lane junction is now repaired, but Highways England plans unrelated overnight lane closures and diversions off the M20 between J9 and J10 (Ashford) for motorway bridge surveys. Highways England plans to start this work Monday 14th December at 20.00 and complete it by 08.00 Tuesday 22nd December. If this goes ahead then local traffic can expect delays and congestion during this time, as motorway traffic will be diverted through Ashford and this will affect the A20, A292 and A2070, and no doubt many minor roads in the area.