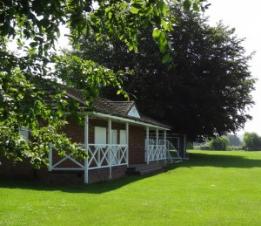 Fire gutted the Wye Juniors Football Club's pavilion in the early hours of Sunday 19th June. Kent Fire and Rescue Service responded to a 999 call from a member of the public, but could not save the building. The blaze appears to have started several hours after the Ian Sloan Memorial tournament ended, and Kent Police are treating the cause as suspicious.

Can you help? Officers appealed today to anyone who witnessed anything suspicious in the area between midnight and 02.30 Sunday 19th June. If you have information, or dashcam or CCTV footage which may assist, please call Kent Police on 01843 222289, quoting crime reference 46/117587/22. Or you can give information anonymously by calling independent charity Crimestoppers on 0800 555111, or use the online form on the Crimestoppers website.

Rebuilt in 2004 the brick pavilion replaced the previous timber-clad building on the same site. This too burned down in another suspicious fire, almost twenty years ago. The photo shows the pavilion as it looked in early June before the fire. Wye Juniors Football Club took over the campus playing field soon after the last students left in 2009. Since then the club has grown from strength to strength. The loss of this facility is a serious blow to Wye Juniors, and distressing news for well over a hundred children aged six to sixteen and all the volunteers who run the club. The now destroyed pavilion was the only building that Imperial College added to the estate during the 15-year period that it owned Wye College.