The magnificent black walnut tree on Churchfield Green is the same age as the surrounding post-war housing on The Forstal, Abbots Walk, and Churchfield Way.

The Parish Council has resolved to plant and maintain trees as living memorials, and for the benefit of future generations. The Wye Remembers project will dedicate a tree growing in a public space to each of the casualties from Wye, from both world wars. A further fifteen trees will commemorate each of the airmen from allied nations who died in training while they were based at Wye Aerodrome during the First World War. 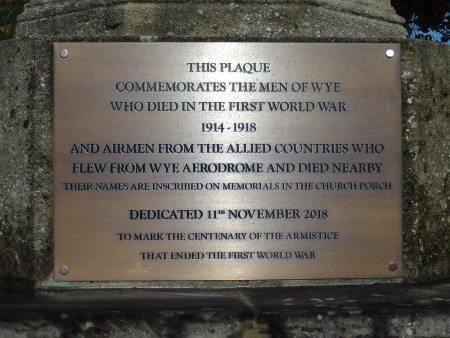 Since 2014 Wye has marked WWI and the centenary of the Armistice in several ways. Notably the physical memorials, which include the bronze plaque dedicated in 2014 to commemorate the airmen from Wye, and the new plaque installed on the repaired war memorial to honour all WW1 casualties. The Parish Council acquired Churchfield Green and protected it as a public open space in perpetuity by registering it in 2015 as a Centenary Field.

In parallel, several events and local research initiatives have focussed public attention on Wye in WWI. These started with research by Cllr David Reece on the original casualty lists. The aim being to verify that the names recorded on the memorials in the church porch in the early 1920s are accurate and complete. Subsequently the 'Wye Chilham and Chartham' project led by Cllr Jasper Bouverie researched the local history of each casualty, their homes and families and the impact of WWl at a personal and household level. Wye Heritage mounted the 'Wye in WWI' exhibition, researched by the late Ian Coulson. Finally, Cllr Noel Ovenden illuminated the Crown on the eve of the Armistice centenary.

These initiatives, the Remembrance service and laying of wreaths on the War Memorial all culminated in the two minute silence at 11.00 on Armistice Day, 11th November 2018.

In 2018, for the first time the reading of names included all those casualties recorded on the Wye College memorial in the cloisters. Afterwards, the sun came out and at 12.30 the bells of Wye Church joined over 1,400 others across the world as part of the unprecedented Ringing Remembers commemoration of the Armistice Centenary. 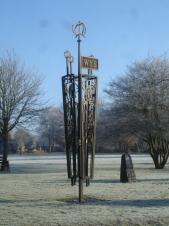 'Show me the manner in which a nation or community cares for its dead and I will measure with mathematical exactness the tender sympathies of its people, their respect for the law of the land and their loyalty to high ideals.'

Looking forward, how will the sacrifices of two world wars be remembered by future generations, a hundred years from now? By which time all personal memories will have long faded away, and the battles of the First World War will seem remote historical events, as separated by time as the battles of Trafalgar and Waterloo are from us.

There is a precedent for bold commemorative tree planting in the parish. The once magnificent beech woods at the east end of the Olantigh estate were planted to mark the Battle of Waterloo in 1815. By October 1987 they formed a fully mature stand on the skyline, but very few of these trees survived the Great Storm.

To avoid the inevitability of future landscape scale shocks like 1987, from either extreme weather events or attacks by pests and diseases, there is a strong practical case for mixed age planting, and the selection of a range of varieties, sizes and growth forms. An informal mixed age planting will also be more interesting visually, more biodiverse, more natural in appearance and more appropriate in a village setting. Mixed age planting will also be less costly and more flexible to manage. Over time, trees at the end of their useful life can be replaced with new healthy specimens. This natural process will maintain the link to the individual local casualty associated to the original tree. To communicate the link between what we now know about each Wye casualty and where they lived in Wye, and each tree, a QR (Quick Response) code printed on a simple tree label would provide a discrete, cost effective and low maintenance way to communicate this information freely. Especially to visitors and future generations, most of whom can read QR codes on their smart phones.

For further information about the Wye Remembers project, please contact the Parish Clerk.