The Roman settlement of Wye and the present road network grew around the ford across this river, where Wye bridge now stands. For a rural village Wye has an unusually compact built form. Many of the houses which line the narrow medieval streets have Georgian or Regency fronts, but behind them are much older 15th and 16th century timber frames. These quirky buildings and traditional materials give Wye its distinctive charm and character.

The name Wye, recorded as 'Wi' in the Domesday Book, derives from the Anglo-Saxon word 'wih' meaning idol, or place of the heathen temple.

Long before 1066 Wye was a royal manor and the centre of the Lathe and Hundred of Wye. As such, Wye functioned as one of the seven administrative and judicial districts in Kent between the 6th and 13th centuries. Lathes are unique to Kent, and the Lathe of Wye once covered and area of about 400 square miles between the Thames estuary around Faversham to the Sussex county boundary.

The village of Wye now acts as a small rural service centre. The cluster of shops and facilities in the centre serve about 8,600 people (based on Wye Surgery's list of registered patients) who live in Wye, and neighbouring parishes. This cluster is walkable and helps to sustain small businesses and facilities, but it has implications for traffic and parking, especially in the medieval streets, like Church Street above.

Facts and figures about Wye

A few key facts about the civil parish of Wye with Hinxhill:

The parish of Wye is 2,410 hectares, much of which is in the North Downs AONB. It contains the village of Wye and the outlying hamlets of Hinxhill, Naccolt, Withersdane and Pickersdane. The total resident population of the parish is about 2,560 people in 1,150 households. The shops and facilities serve about 8,600 people (based on Wye Surgery's list of registered patients) from Wye, and several neighbouring rural parishes.

A lone walker on the Wibberley Way. This permissive path is close to the eastern edge of WYE3. 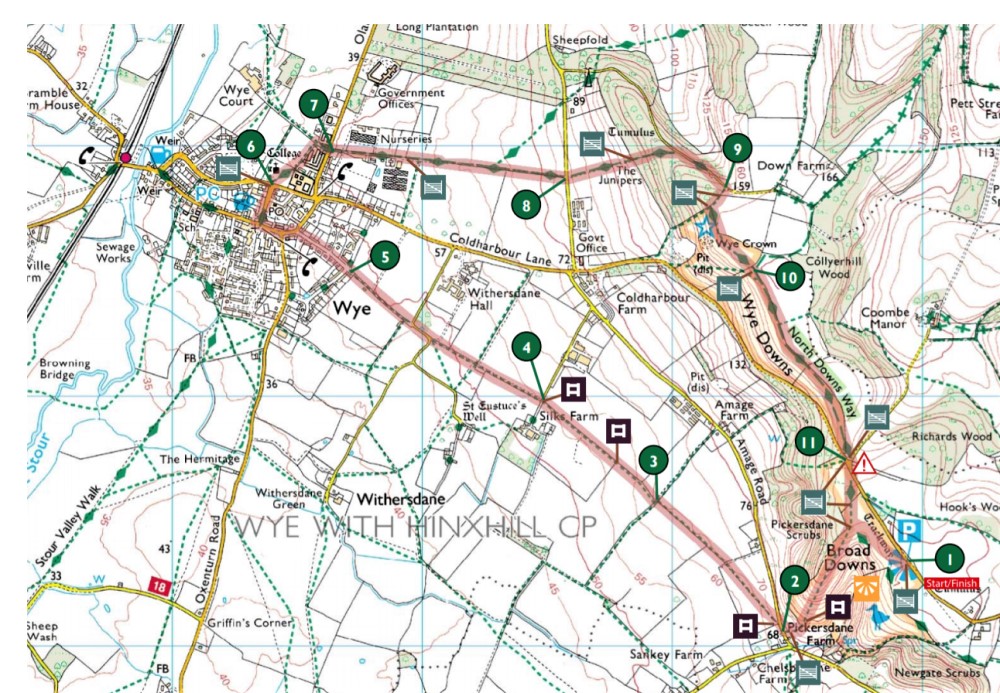 Half of this spectacular circular walk follows the North Downs Way from Wye, to the Wye Crown and Broad Downs viewpoints.

Please click the link below to download an Ordnance Survey map centred on Wye. This shows the parish and its boundaries, footpaths and other information. Crown Copyright Reserved. Reproduced by Wye with Hinxhill Parish Council under under PSMA Licencee number 100051457

Wye Farmers' Market, not only a sociable place to shop for local produce, but also a chance to go out, meet friends and neighbours, and catch up with the news while children play on The Green.

The Wye National Nature Reserve owned by Natural England is a mile east of the village. The reserve is also designated as a Special Area of Conservation (SAC) primarily to protect 345 acres of rare species-rich chalk downland. Broad Downs and Wye Crown offers some of the best walks and panoramic views in Kent. From the top of one of the highest places in Kent you can see about 40 miles across the High Weald to Fairlight Cove in Sussex.